Historical conditions of the novel’s genesis

Solar was published in 2010, which means that it was published after the end of the two terms of the American President George W. Bush (2000-2008), as well as after the term of the British Prime Minister Tony Blair (1997-2007), and the Iraq War that these two men prosecuted following the September 11th, 2001 terrorist attacks on the United States. The novel refers to these historical events a few times.

Ian McEwan became well-known (to literary folks) after having published a number of novels, but most especially Amsterdam, which won the Booker Prize in 1998, which is perhaps the preeminent English-language literature prize. Before this several of his works had been made into films (and so he became more well-known to non-literary folks), including The Cement Garden (1993) and The Comfort of Strangers (1990) [directed by Paul Schrader, screenplay written by Harold Pinter, starring Rupert Everett, Helen Mirren, Natasha Richardson, and Christopher Walken].* McEwan’s work may also be known through the filming of Atonement (2007), starring Keira Knightly, James MacAvoy, Saoirse Ronan, and Vanessa Redgrave.

Conditions of my reading Solar

I have read no other novel by McEwan, but I read the story “First Love, Last Rites,” when I was in college and was thrilled by its perversity. The collection of stories by the same name, The Cement Garden, and The Comfort of Strangers apparently all led to the moniker “Ian Macabre.” But this categorizing only concerns his early work and doesn’t really apply to Solar or later works.

The film made of “First Love …” starred Giovanni Ribisi and Natasha Gregson Wagner, but was generally not memorable … honestly I’ve never been as impressed by Ribisi as I’d like to be and Wagner I identify most with her marginal role in High Fidelity (2000), a hilarious movie [apparently she was in Lost Highway (1997)! but of this I have not the slightest recollection].

The narrative is divided into three different parts, corresponding with the years 2000, 2005, and 2009 in the life of the largely unlikeable protagonist, the Nobel Prize-winning physicist Michael Beard.

As the novel begins, the protagonist is in part taking stock of his life as he’s recently learned that his fifth wife, Patrice, is shortly leaving him. In so many respects he feels washed up. Although he won the Nobel Prize for his articulation of The Einstein-Beard Conflation, that event occurred when he was a younger man and he’s tacitly accepted that he has done nothing of value to his discipline since that time. Instead, he’s merely coasted on the fame of his name. He is overweight, balding, short, and … a quite prolific serial adulterer (in his last four marriages). Instead of a teaching position, he works at an institute where he still has the occasional run-ins with versions of his much younger self (post-docs) who he ignores with condescension.

He is sad that Patrice is leaving him, but it is not clear that this effect is not mainly resulting from being left, rather than from some actual emotional attachment to the woman. She is leaving him because she learned of his infidelity, yet it seems as though she is at least partially relieved by this discovery as it allows her an escape from the marriage.

Patrice’s new freedom entangles her with a contractor who beats her on one occasion and … one of Beard’s post-docs. The encountner with the latter, Thomas Aldous, leads to the latter’s death, albeit through a strange and bizarre accident for which Beard is responsible only through the most tenuous chain of indirect causes. Fearing that the death will be attributed to him, Beard makes the contractor, Tarpin, appear as the murderer. This gesture is successful, and Tarpin goes off to prison. Beard finds research that Aldous had done and left expressly for him.

This part of Solar begins with the humorous explanation of how he was sacked by his previous job at the Institute, which involved a couple of culture war kerfluffles. Beard, the late 50-something-year-old wholly unwoke mister, makes ill-advised comments about women in physics. But the opportunity, although more than a little faulting the outdated bear, trivializes his antagonists as well. Bearts fault, as the narrative tells it, is mainly being in the wrong place at the wrong time.

More importantly, Beard is capitalizing on the research done by his wife’s previous love, his post doc, Thomas Aldous. He’s ignoring entreaties by Aldous’ father to meet with him for what he assumes is an opportunity to resolve emotional issues after his son’s untimely death.  Beard’s also involved with a new woman, a younger business owner. In turn, Melissa has finally — after five marriages — been the one to get a child from him, albeit through quitting her birth control and not telling him.

But perhaps the center of this part, maybe the Solar altogether, is devoted to an encounter with a younger fellow on a train. Beard is seated across from him and eating — deriving an almost perverse pleasure therefrom — a bag of crisps (potato chips, for Americans) he’d just purchased. The fellow takes a crisps from the bag sitting on the table between them as well. Beard is scandalized by this action, and his interior monologue is quite droll. Beard then takes another crisp. The man takes one. And again, and again, until only a few remain, which the fellow generously gestures Beard should take. By this time, Beard is in a frenzy, though neither has said anything. To finally cement his superiority/indignity/one-up-manship, Beard takes the fellow’s unopened bottle of water and drinks it all in one gulp. The fellow stills says nothing. The train arrives at the station. The fellow pulls down Beard’s bag and then departs. Beard suspects a physical altercation awaits him on the platform, but in fact the fellow has gone. As our protagonist is leaving the station he reaches into his pocket and finds a bag of crisps.

Beard then goes directly to the investor meeting to which he’d been travelling, where following an encomium to solar power as the solution to the imminent energy crisis, he offers to his audience impromptu a retelling of the experience he’d just had on the train.  When mingling with investors after (for his contractually obligated 30 minutes), a younger man addresses him suggesting Beard had fabricated the story, which apparently is well-known among certain cultural anthropologists as that of “The Unwitting Thief.” Typically, Beard responds with indignation.

The unveiling of the solar startup’s proof of concept is about to take place in the New Mexico small town Lordsburg. Beard is now the father of a four-year-old daughter Catriona, but true to his anticipation in the previous section, his paternal activities have been uninspired, perfunctory. He does not even live with Melissa and the child. What paternal instincts or feelings he might be expected to have are almost wholly absent. Further, Beard has been involved with a woman from New Mexico named Darlene. Neither Melissa nor Darlene know of each other, so Beard believes.

As Beard arrives in Lordsburg the day before the unveiling, he is confronted by Tarpin, Patrice’s erstwhile lover and the patsy for Aldous’ accidental death, recently released on probation from prison. Tarpin has no grasp of to what degree Beard is responsible for framing him. Instead, he thinks it was Patrice, but he’s there to enjoin Beard to employ him in any sort of fashion in this new venture. He seems to think that Beard can (and should) help him by throwing some work his way. True to Beard’s all-consuming solipsism, he indignantly refuses. Tarpin goes away with threats, viciously angry.

Beard then receives a phone call: Melissa has recently been contacted by Darlene and is coming to Beard with child in tow, to make clear that Beard is hers. Darlene equally stakes her claim, asking Beard to make good on promises made during flagrante delicto that they be married. And then a lawyer from the seemingly forgotten Institute arrives.

Beard assumes that the lawyer’s appearance is a dramatic but pointless gesture of his previous employer to take advantage of the circumstances, to somehow claim that Beard was an employee of the Institute when the idea for the startup originated. Instead, the lawyer has more than adequate documentation that the ideas are Aldous’ brainchild — in part substantiated by spurned father — and therefore the property of the Institute. Wholly in character, Beard rebuffs these claims and plans to continue with the demonstration the next day, believing that the windfall coming after will more than repay the legal debts needed to quash these claims.

Melissa and child arrive, and then the other shoe drops: the million dollar solar panels have been sabotaged and Beard’s intentions have been dashed. No unveiling will occur.

The novel is grounded by a series of comical events, and everything else is merely the history told by Beard, but as I indicated above in my summary, the parable of the Unwitting Thief may be the center. The reason for this is that the parable, as I’m calling it, is a meta-fictional device. It’s a story within a story, and when writers compose these episodes it seems to me that they reflect back on the process of writing itself (either explicitly or not).

Similarly, in Dashiell Hammett’s 1930 novel The Maltese Falcon—known to most through its 1941 film adaptation by John Huston, starring Humphrey Bogart, Peter Lorre, Mary Astor, and Sydney Greenstreet—a story is told by Sam Spade that’s come to be called “The Flitcraft Parable.” The Flitcraft Parable does not seem to advance the plot at all, so it’s curious what is the role of the episode in the work.

It’s not hard to see that Beard is not merely the unwitting thief of the crisps but also of Aldous’ ideas and legacy. One might protest that unwitting seems off the mark, since Beard knows that he’s taking these from Aldous. But mostly Beard claims that Aldous’ ideas are at best outlines for which a lot of detail wrangling still needs to be done.

Beard’s character is anything but self-aware, if self-aware means that a person’s actions betray ethical self-determination. Beard never feels any guilt for Tarpin (his unwitting accomplice) nor for Aldous. He feels no guilt for the long string of infidelities (past or present) that ruined his last four marriages. Rather, in every instance Beard is only self-concerned.

The Parable of the Unwitting Thief is far from as inscrutable is the Flitcraft Parable in The Maltese Falcon. The latter fit together like glove in hand, in part simply because The Maltese Falcon is a story that doesn’t make much sense, unfolding a drama of characters pursuing a pipe-dream at best.

Solar doesn’t share that inscrutability, that depth. I’ve seen it described as a satire, but the object of this satire is unclear. I posit that a satire must have a straight-man, so to speak, in order for the critique to be plain. Whereas here everyone falls under the knife. Isn’t that misanthropy?

* Despite knowing of and esteeming both Paul Schrader [who wrote Taxi Driver (1976), Raging Bull (1980), Mishima (1985), The Last Temptation of Christ (1988); and directed Mishima, American Gigalo (1980), Affliction (1997), and First Reformed (2017), as well as many others] and the Nobel Prize-winning playwright Harold Pinter [who wrote the screenplays for The Servant (1963), Accident (1967), The Go-Between (1971), and the play which later became the film Homecoming (1973), as well as the plays The Birthday Party, Betrayal, No Man’s Land and many others], I began watching The Comfort of Strangers and then turned it off. The lighting, character motivations, and dialogue seemed contrived. Now I feel like I need to give it another chance. 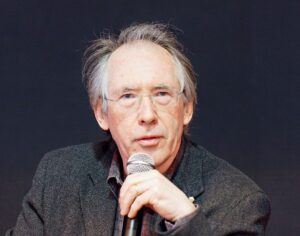