Realism Lite is what I call the gestures film and television — the latter especially — make to suggest serious violence without actually including it in the narrative or even the mise en scène.

Probably there are interesting kinds of realism lite, that fail to include elements of real human life that are more common, like psychological disturbances and political realism … I’m focusing on this aspect of realism lite because violence is a unique currency in film.

Why is Violence a Unique Currency in Film?

Look at comic books. Some of the most important comic books in American history are of the superhero genre. If an issue is published that does not include some kind of physical violence (a fight, at the very least), the editor is just not doing his/her job. That kind of action turns pages and is ultimately what the superhero is only really good at (a terribly sad realization).

Perhaps more the case in film (and the fact that the transcription of comic books to film has failed so remarkably is a problem for reflection). Film has gone through period after period where it has dramatized physical action: wrestler films, westerns, car chases, martial arts films, spy films, etc.

Audiences are thrilled by violence and physical action, and the success of the films that include these elements is a testament to that.

Yet, Being Thrilled by Violence is a Moral Problem

It’s not a moral problem in the sense that if you are thrilled by violence you are a degenerate and should hide your head whenever possible (although you might give it a think). It’s a moral problem for filmmakers, production companies, etc., because they know that they must provide the thrill but that too much of this element can produce a backlash.

The solution to the problem is realism lite.

Must Realism Be the Rule of the Day?

Films are not obligated to satisfy realism in their production, and to my mind some of the best films are those that are not restrained by realism. This is not a defense of realism.

Yet when a film draws on realistic elements to tell its story, it does bear an obligation to provide an accurate portrayal. Especially in the United States when violence — gun violence in particular — is dramatized.

Midnight Run (1988) is sort of travelogue/buddy film involving the bounty hunter Jack (Robert DeNiro) and the Mafia embezzling account “The Duke” (Charles Grodin). Jack has been assigned to find Duke (in New York) and bring him back to Los Angeles where he’s due to testify against a Mafioso from whom he’d embezzled millions of dollars.

Jack and Duke take nearly every conceivable means to travel across the country. This is the respect in which the film is a sort of celebration of the geographical and possibly cultural diversity of the country, the road trip film. But mostly it’s just reifying the myth that hard work leads invariably to personal success.

Critics were really thrilled with this film at the time and even in retrospect, and there are certainly features of the film which are laudable.

Yet I find that the realism lite of Midnight Run to be a serious concern that undermines what is of value in the relationship between the characters of Jack and Duke (that interaction is really what pleases most critics).

First, when we are introduced to Jack, he’s apprehending a bail jumper in a hotel. Jack is trying to pick the lock of the hotel room. He drops his tool and bends down, fortuitously, to pick it up, just as his quarry fires a shotgun blast through the door. Jack is unhurt and seemingly unphased. He’s experienced this before.

Second, are at a bus station in Chicago where four Mafia killers are arranged from windows and ledges surrounding ready to kill Duke. But before they can get a shot off, some dozen police cars show up. As the police are about to take Duke into custody, one of the shooter decides to fire a shot anyway, then followed by his colleagues. They all miss.

Third, Jack, Duke, and a second bounty hunter are escaping from Mafioso pursuing them in a helicopter. They crash beneath a bridge and seem like they cannot escape. A gunman in the helicopter is shooting at them with an automatic weapon. The car is riddled with bullets, but none of the three men has been hit.

Certainly other periods of American television also dabble in realism lite, but I think a unique example can be found in the otherwise unredeemable “The A-Team” (1983-87). It’s horribly written, horribly acted, horribly shot?

In all of the preceding, I’m not ignoring the fact that film and television raters probably use the presence of blood as a key index requiring a higher level of maturity in its viewers (I’ve been looking this up online — what everyone calls “research” — with no success so far). These would be bad for the film/television producers because it can limit the audience and therefore sell less tickets/advertisments. 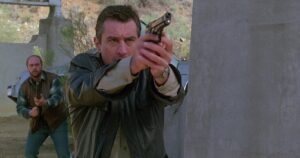